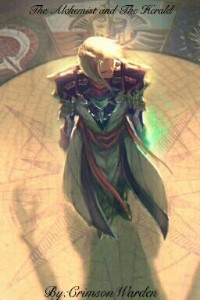 The Alchemist and The Herald

Within a world overflowing with magic, all living things posses Mana. It stands as a quantified measure of the power that an individual wields and dictates the order of the food-chain and the hierarchy of nations and civilizations. Plants, animals, humans and humanoids, magical beasts, monstrous existences and even minerals and ores accumulate mana throughout their natural lifespans/permeated existence and gradually create physical manifestations of the "world's breath" in the form of Mana/Soul stones.

A cataclysmic war from 500 years in the past had left deep scars in the world, extinguishing the history of noble kingdoms that formerly ruled much of the lands in peace and led to the loss of many great technologies and a long period of imbalance for years to come.

But before the fall of the greatest of these kingdoms, a prophecy was left for all to heed. "Beware! A Herald will come to sound the advent of a new age. By sword, by magic and by wisdom, the world will be plunged into another great war that shall stain it in the blood of millions before returning it to its former glory."

Weeks after the beacon signalling the arrival of the "Herald", a small band of individuals led by an alchemist who calls himself "Will" saves a village from the onslaught of a dragon, defeats a nationally acclaimed warrior in a duel and performs a feat of magic deemed impossible by the mages of the current times.

Is he the prophesied Herald? Will he put the world to the torch or will safeguard the future of life after the fated fall?

Well now, I suppose I should start by compiling what I told you in the comments.

1. In the prologue, you gave us a massive Info Dump. You did not continue to do this, so good on you! You also decidedly began telling the story mainly through character interactions, though some information is still given in other ways, which is also good since it offers a kind of balance between the two. I have to remember that the point of this story is not the same kind of Chaos that I usually prefer, so this works rather well in your case.

2. Belay the Deus Ex Machinas... I myself am very much guilty of abusing this so I don't know if I can even tell the author this, but please try not to make too many sudden appearances/changes within the story. Take it slow, make things at least seem reasonable.

3. You've found your own word count to be 2000 words per chapter, which is pretty good. Nothing much to say here.

4. Unless you plan on making this story last very very long, like I am doing with EUPHORIA, there is no real need to extend the amount of chapters to depict a certain... event.

6. Rambling is healthy for your mind as a writer of any kind. It helps one explore the limits of their own imagination. Even if you type stuff down only to decide that the readers don't need to see it and delete it before posting a chapter, it can still help you flesh out whatever you do decide to post. Never forget this.

8. Up to twelve days between chapters is my own design. You should find your own, but I hope my advice helps you in this endeavour.

Now then, for the review...

Overall Score = 4.5 because the mistakes/problems with this story are very, very minor.

Style = Not too sure what happened between one half of the story and the next, but the styles changed and it caused some disorientation for me personally. Though, I must say that the second style seems much nicer. I would advise you to rewrite the first few chapters using the same style as the second half of the story currently available.

Grammar = I didn't find any mistakes, no problems with the tenses, no strange povs (like there are in my stories). So 5/5 it is!

Story = 4.5 mainly because of the needless elongation for the story prologue. Otherwise, I have no complaints.

Characters = 3... this may seem a little harsh, but the characters in the story seem... sudden, though decently fleshed out. I suppose this is because the story has only just begun. Later on, things are bound to get a lot better!

All in all; you just need more chapters and a more directed plotline. (We have a goal -Is he the prophesied Herald? Will he put the world to the torch or will safeguard the future of life after the fated fall?-, but no revealed path to follow as of yet. This isn't a problem, as it will be adressed naturally as the story progresses, just figured I should mention this.)