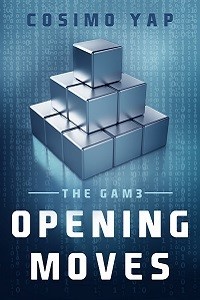 The standard fare with a liberal dose of borderline genius

As a whole this is an excellent story of one young man's quest to save earth from an alien threat while uncovering the secrets of the simulated reality he spends his time in. I thought the characters  were well written and had a depth that I felt was lacking for the mc. I would absolutely read a continuation of  this story as it finds the perfect balance between action and plot, if I had to say something negative it would be that the mc is a bit one dimensional and infuriatingly unintelligent for a supposed hacker.

Reviewed at: Sacrificial Pieces is now out on Amazon!

First off I want to say that the writing, the grammar, and everything is absolutely fabulously executed. Second, that ending was such a plot twist that it almost made me get a fucking heart attack. Great work on that btw. Third, this is truly one of the few fictions that will most likely be remembered out of everything I’ve read.

Finished this a couple of months ago and forgot to review. feel that this book is totally worth reading

Not My Cup of Tea

I'll preface this by saying I'm only 5 chapters in and I very much enjoy VRMMORPG novels.

This novel, from the 5 chapters I've read, is not my cup of tea.  There are some "lazy writing" tropes.  For example, the author tends to make generalizations, at least early on, about things he or she doesn't want to take the time to explain, such as alien technology.

However, that would still be tolerable, though it irks me as details like that contribute to world building, even if they're pseudo-science.

The main issue I have is an issue I've seen in many webnovels: wish fulfillment.  Wish fulfillment is a fundamental aspect of most webnovels, but to do it well requires patience to develop the story to a point where it feels like the MC has earned it.  When it doesn't take any time or effort for the wish to be fulfilled it feels like the author is writing about a daydream; you know that daydream we all had when we were kids where the world revolves around us and we suddenly become rich and famous and all of the people who ever slighted us are hanging their heads upset that they ruined the chance of being friends and so on?

Even though the author doesn't go that far, he or she still does some pretty outrageous things from my perspective.  The MC develops a high level AI program within months of the aliens appearing despite not even having finished getting a degree in computer programming; the number one profession in the universe is gaming (I can tolerate it when people write about game economies, but the idea that it's the number one profession just doesn't work, sorry); the MC has an old raiding buddy who somehow is extremely rich and famous already, but decides to bring the MC in to game with him, spending loads of money without having any sort of evidence that the MC will be helpful; as a result the MC is put into a penthouse suite of a skyscraper where he will game for free (only has to pay part of his earnings, though no proven ability to be successful at this game); the MC doesn't even bother reading the materials on the game sent by the guy, HIS EMPLOYER, and just has the AI read them, yet the guy is somehow fine with it; the MC instantly meets a "beautiful" mysterious woman named Kitana who wields (can you guess it?) a sword.

That's just the first couple of chapters and it already feels like a young kid's daydream to me.  It would be fine if that were the target audience, but the MC is college aged, not 12, so it seems the target would be people in their 20s.  I respect the creative effort needed to write these novels, and that's why this novel frustrates me because it feels like the author, at least initially, cut some corners to just get into the part of the story they wanted to write: the game.  As a result it's a much worse reading experience in my opinion.  Other people say the world building is excellent, the character is realistic, and the plot is totally original; I'm sorry to say I just don't see it.

As for the other aspects of the novel: the plot seems fine, nothing new but no problems.  The character would be fine without all of the wish fulfillment.  Grammar and spelling are acceptable, I only noticed two errors in five chapters.  Basically, if the above complaints don't bother you, there's no reason not to read this story.

Wonderfully written. Very well structured and planned, this is on of those Sci fi stories I've read and haven't forgotten. It's a very good read and stands out in a good way. The story has unique ideas and kept me hooked to the end of it. I'm looking forward to re-reading it. Congradulations, and very well done.

I quite liked the story but my main gripe is the layers upon layers upons of intriguie. This book needs a drama tag. I know it is personal preference but I did dislike how he couldn't trust one person. I also didn't like him jumping from mentor to mentor without going up in any of their ranks. He got stronger in very unconvential ways, which I guess is the point, but I still feel too many story plots overlapped and he never got time to do his quests. I would have been fuming if I was Alan because I hate leaving sidequests undone and he had so many.

Why do you do this?

This is a great story. I love the world the author has built, and despite the fact that the author is one of the most inconsistent posters of all time, I've stuck with this story for years.

The main complaint I've heard (besides the hiatus) is the main character is oblivious to some things. I agree in part to this, but I think he's gotten better, and I still like him and find the story to be fascinating.

Solid read, not my taste

I found this story really well written, unfortunately I didn’t much enjoy it beyond a certain point. That’s not critique though, I just didn’t find the story my cup of tea. Personally I enjoy a less dense read; this novel seemed to constantly impress upon me the depths of its intrigue, and at a certain point that tired me out. The main character was always yanked around, nothing was simple, everyone was potentially your enemy and your ally at the same time, morals only came in shades 40, 50, and 60% gray. Which, to be fair, isn’t really an inaccurate portrayal of complex situations. I just happen to prefer a cleaner story, with less intersecting plots, and a good wholesome badass who loves his mama and don’t take nothin’ from nobody. This story is good, but it’s not that.

I really liked the story, until....

I'm not the type for reviews - writing them, that is - so I'm gonna keep this short.

Earth is annexed into the System, common story, just that in this case the System is not the "new reality", but a game that every annexed interstellar population is forced to play. MC starts playing. Has an AI to help him - calculate trajectories, display maps, etc.

And after quite some time his AI leaves him. He loses his defining character trait. About as annoying as an amnesia arc.

Third point: There was a long hiatus just some time ago and I do not know whether that will be a recurring problem.

Do note that I wanted to keep this short, and listing the big negatives was shorter. In conclusion, everything not mentioned (grammar, storyline, etc) is good enough to not be on that list.
"Big" negatives meaning there are "small" negatives as well, so "good enough" just means "not remarkably bad enough". Figures.

A book that will truly age

This is the one of the greatest stories on RoyalRoad. Regardless of what genre of reading you're into you should find this an enjoyable read.

Character development is strong and the plot is excellent. What really makes it, though, is the unbelievable universe. It's massive and every single planet and character we meet feels unique and special.

Trust me and read it. What have you got to lose? Other than your desire to do anything other than read The Gam3, that is.