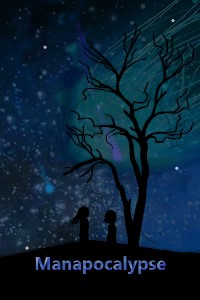 Mark and his sister Liz have grown up in a household that had always been preparing for the Apocalypse, but they never expected it to actually come to pass. Now, their family is struggling in a world where monsters appear from thin air and technology no longer works. They thought they were prepared, but who can really be ready for the end of civilization as we know it to?

Follow the Randall family as they discover what happened to the world, why it ended, and what new abilities they all seem to have.

Book 1 in completed, and book 2 is in a long, slow, and intermittent state, and will some day in the distant future be completed.

Thanks for the story it's been a great read

Just started yesterday and I'm all caught up. I've been enjoying the direction you've taken the story, in that it's not focused on an OP MC looking to find and take down the big bad behind the 'system' but more focused on a (very strange yet extraordinary) family coming together to try and not only survive but thrive in this strange enviornment they find themselves in whilst also helping others and building up a 'new world' community.

Personally I like the pace. I think thats partly because I read all the story up to date at once but also because I expect a slightly more slice of life feel to this story when compared to others in the same genre.

Problems I've had are 1st: dialogue. I've found myself thrown out of the flow of the story at times when dialogue is either a little stilted or worse, completely out of place due to either the character or just not sounding like natural speech (ie. too formal or too detailed), however this has shown up less often as the story progressed.

2nd: I personally didn't like the direction you've taken crafting. This material manipulation ability everyone pulls out is boring imo. It's just too easy and takes away from a lot of the fun I've gotten from crafting in stories like these and also meant that building up the town happened far too quickly and easily which drained any enjoyment or satisfaction I may have had in it also.

My last issue isn't really a problem. I just noticed myself getting annoyed when reading too many Mark POV chapters in a row :L he's a funny guy with an interesting perpective but... well, small doses are better than continued exposure haha.

Hopefully that's constructive. Overall it's been a great read and things have progressed logically which isn't as common as you might wish in online fiction. And you can see how our main characters aren't perfect narrators with things going on they either don't notice or make wrong/different assumptions. The characters themselves are well fleshed out and aren't static though perhaps other characters should be a bit more involved and fleshed out rather than seeming like extras, of course the town expanded pretty rapidly and I understand it can be hard to find the balance between character development and plot development.  I see this all as a sign of a good writer.

Edit/note I don't know if it's just a visual glitch on my end but for some reason whatever I rate this star wise it apers in the review it shows as one less right now I have it at 4.5 stars but shows when I look at the public version 3.5 stars

by Quartz Ring Friday, December 29, 2017 11:04:41 AM
I picked up your story by pure chance. It was slow going at first but i saw something in what I was reading. Eventually the pretentious competition between siblings settled down, and the characters really came into their own. I thoroughly enjoyed my ride through pirate petes playground, I really cannot wait for the release of book 2 I hope you have ad much fun writing as I have reading
Report

SO glad I found this

I've seen quite a few of these modern day apocalypse novels on the site, but all of them are ALL doom and gloom or the MC is OP, or something else. This is just plain fun, I love it!

This is very good! A steady introduction to the apocalypse, a faulty System trying to implement, and some really funny sibling rivalry.

30 down and begging for more!

Ok. Found this book today and couldn't stop till id hit all youve released to date (chap 30)  and I must say I'm really loving it. The characters seem well thought out and real. And although you may feel its a little slow at times. Realizing most of its happened in one day you realise your not just reading but actually living the day with them!  I'm hoping more happens with the pet dog as I feel sorry for him compared to the other 2. Maybe a mana core? 🙏   and no mage type class yet but am expecting it from the new girls? Anyway. Keep up the great work. And thanks. S

good story, a tad slow on the system appearing but still fine with the quality! keep up the good work because i want more chapters :D

the trouble with tribbles

But honey it's a

Hon come on it's

-Dear we are never speaking of this again......

It's a little cute, a bit bratty, sort of cheeky......but mostly it's the apocalypse so let's enjoy ourselves.

The story moves to fast and yet at the same time to slow. The main characters have explosive growth in skills but the story progresses slowly. In 30 odd chaptrrs only 24 hrs have passed yet the MCs are already OP. The balance just isnt there.