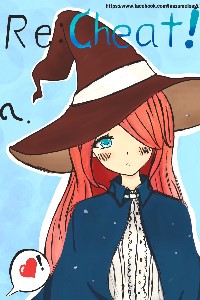 After trading his own life to save a little girl Daichi Akiyama found himself in an empty space where nothing exist nothing but his consciousness, until one day a black hole appeared out of nowhere and transferred him to another world.

(Thanks for reading my first story! And yes the cover and all illustrations in the story are made by me just in case you want to know.)

Can't Give a comprehensive review. Too many japanese expressions make it a cringeworty experience.

It is like reading a piece with no punctuation, it is phisically annoying.

Honestly, they add nothing. Be it to the characters, the world, or the immersion.

If anything, they detract heavily.

The story and style tends toward a lighter read, both in terms of mood and how it is read. It features short paragrafs, with sufficient space in between, and the style focuses mainly upon dialog. This prevents the reader from getting mentally bogged down by details and instead consume to story at a quick pace.

The style does have some consequnces, as the trimming of narration and exposition have been overdone. This makes it hard to follow what actually happens in the story, as key pieces information are simply not pressent. Some of those key pieces of information include: Point of View changes, time skips and other details to make sense of what is going on. Some references to people are somewhat obsure (I am looking at you chapter 13), where it is easy to get lost in who is who, and what they are trying to do.

While there is no prevalence for info dumps, there are several places where some pieces of information are used as if they were common knowledge, but we as readers have seen no place where those things are explained. It would almost seem as if there used to be some info dump about those pieces of information, but the entire section concerning it was removed, and the author then forgot that it was removed. The most obvious example of this is the term "mid-tier magic", which is suddenly used and assumed understood by all parties, even though I have not found any prior mentions of it in the text.

The story does not seem to be heavily plot driven at the time of writing. This is an understandable choice, considering that the main character is quite overpowered. Here I am using overpowered as "has so much power that he can just steamroll power conflict based plots". There are of cause other ways to build plots, but this story instead seems to focus more on drama and comedy elements. This story focus is then combined with a japanese jargon to create a much less serious atmosphere in the story.

The execution of those elements are somewhat mediocre. They are not exactly bad, but I have seen a lot of other stories on this site that pulls it off better. There are some problems with cringe-worthy situations, and others where the situations seems somewhat unnatural.

Those problems are somewhat related to the problems with the characters. We can roughly divide the cast up into 3 kinds of characters: The MC, the extremes, and the rest. The MC has a decent range of reactions, but the low amount of introspection means we do not know much about the deeper parts of his personality. The extremes are a group of characters who are important and have theirfor been granted a very promenent character trait. The problem is that they have taken those character traits to such an extreme that they appear artifical, and thereby damages the willing suspence of disbelief. For the rest, their characters appear mostly neutral, with very little specific personality. This is naturally okay for random bystander #14, but when the only alternative is extreme characters, it becomes a problem. For that group a larger dose naration describing their body language might alliviate that problem slightly.

Grammar wise, the story has its own problems. The amount of spelling mistakes and obvious comma mistakes are low. There are instead some problems with tense and word type choice, for when there are several word derived from the same thing but of different types - such as subjective, verb, adjective, adverb and so on. One of those is the use of give an "apologize" instead of an "apology".

This results in an overall semi-poor quality product, compared to most other stories I have read on this site. The author does seem to work on some of those points, and some improvements have been made, though not enough at this point in time to change the judgement of this review.

If the author later on considers this as one of his/her main works - instead of just a first writing experiment; then I would recommend the author to rewrite at least the part that have currently been published, when he/she have gained more experiance and overcome a significant amount of the problems pointed out in this review.

I can sadly not directly recommend this as a good story, but if you just want some random light OP MC story, then it could still be considered as an option.

so i like the story, and the skills, but the exaggerated umuu and etoo and wannabe japanese style of your story plain sucks. it comes over as so fake it's cringeworthy.

at least it's that way to me.

and i read about every good translated story on NU i can get my hands on.

So far, up to chapter 11, things seem to be going well. There are no obvious mistakes in the story, and while some of the scenes feel overly dramatic, or a little bit mood swingy, the overall story is good. I think a few more details would be nice, but not neccesary. I think so far that the main part of the story hasn't actually happened yet, and what there is so far is just the foundation for it, but I could be wrong. I feel the story has a good potential, and am looking forward to the future =)

A good story with potential.

Style score: 4/5 still lacking a bit of details to the story and some part can take a while to understand but it's nice and easy to read.

Grammar score: 3,5/5 have some mistake with past and present tense a bit here and there but it doesn't really effect the story that much.

Story score: 4,5/5 The story is doing good so far, it feels a bit slow however the jokes made up for it ;)

Character score: 5/5 Liking the characters so far, each of them have their own personality and way of speak, some may be a bit overdone but that doesn't really effect the story itself.

It's an unoriginal story but fun nontheless. Just fix that goddamn awful grammar!