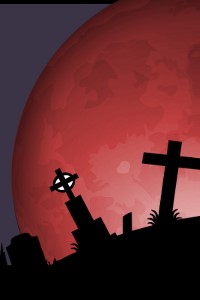 Abigail is not afraid of anything in particular. She’s just… afraid. All the time. Of everything and everyone. She weaves wild stories to explain her state of perpetual anxiety to the people around her, preferring they treat it as a joke than treat her as a neurotic freak. It’s a plan that works well enough: with a little help from her best friend Megan, Abigail can almost pretend to be normal.

But when Megan decides to help out with Abigail’s love life, Abigail finds herself trapped on a date with a ridiculously sexy man who accidentally lets slip that some of the things Abigail has “made up” are true – and that the rest of the truth is stranger than her fiction.

One of my favorite Urban Fantasies

I've never seen a story before that shows exactly what social anxiety is like, even if it is taken a bit farther than average. Its easy to identify with the main character if you have had anxiety of any kind. Seeing how she handles it while being thrown into a world of fantasy in the dark corners of our world.   Werewolves, Time stopping Vampires, Fae, Ghosts, sex and a constant struggle for survival and finding your place in this world. That could easily buddy up with stories like Dresden Files.

I've been a fan since book two and even a patreon. Its really worth following if you enjoy urban fantasy at all.

I read this story on your website and I have to say - hilarious. Not only is Abigail amazingly funny, but all of the characters have fully fleshed out personalities and react believably to the craziness that happens to them.

I have been reading this one for some time, nice to see it here on RR.  This one is fun peeps.  Vampires werewolves and more and of course our crazy mc showing everybody that in a crazy world being crazy really helps.

Beautifully written. Great characters. Wonderfully emotive inner dialogue, and solid pacing overall.  No real denouement, which was only pacing issue I noticed.  Stopped reading after Book 1.  It is too hard to be in Abigail's f*cked up brain for me and the twist at the end of the book ruined everything else (for me).  I view this as a personal headspace thing, though, and not a failing of the author.

I found this story a few months ago, it is very well done. I wholeheartedly recommend this to everyone. Good Grammar, Great Characters and a good plot. I hope the story continues to update (currently on book 6)

Back Once Again So I Have To Review

This is a great urban fantasy that is now once again posting here after a long break.

Follow Abby as she discovers how anxiety makes a whole lot more sense when that creepy guy leering at you really is picturing you as piece of meat, and faeries hide in dark corners just waiting to feed off your fears. Confronting both the supernatural and supernatural levels of anxiety makes things only that much more interesting.

I personally love Abby's character. Despite her near crippling anxiety and constant self-depreciation, the author manages to make her feel real and keeps me invested in her struggle.

The urban fantasy setting itself also feels rich as the reader learns more about it along with Abby. Vampires, werewolves, ghouls, faeries, and mages all have their own cultures and lives that make the world feel lived in.

In general, secondary characters have depth and their own motivations. As more characters are introduced, their interactions with Abby can sometimes end up revolving around one singular trait or event. However, the author does a good job of managing this by maintaining the pace of the novel, so the characters never start to feel stale.

Grammar throughout is solid.

Overall this series is a great read and I would recommend it for anyone that already enjoys urban fantasy.

Cute and refreshing, but with an interesting story.

Ok, so, I love the shit out of this book. Yes, harem stuff is controversial. I'm going to ignore that part/tag, because it's not really that important. Sure, the MC has a boyfriend and a girlfriend. Sure, there's some moderately explicit smut. That's not what I'm here to talk about, though.

This book is a good binge, I recommend you give it a shot. And by a shot, I mean at least 10 chapters- not because the first couple are bad, but because by chapter 10 I bet you'll be hooked too.

Grammar? Typoes, no. Artistic use of run-ons as an anxious stream-of-consciousness? Maybe, I'd have to go back and check. Maybe not. Misuse of homophones? Nope. Also 5 stars.

Characters? Relatable. Accurate. I have anxiety disorders, as does the MC(who has it a bit worse I think, as I don't make up stuff about vampires and stuff. Granted, some of my worries are really non-realistic and can offend friends when I worry they don't like me yet again, but well, I think you know what I mean- mine don't include fantasy{i.e. tolkein stuff} even if they can be pretty uh, out there, unverified, baseless, or so on.

If you want to understand a bit of what anxiety disorders can be like, either because you have a friend(and maybe you're tired of reassuring sinilar anxieties over and over again because you think they'd be over those by now) who has them or just want to know? This may help you understand them a bit. We worry about *everything.* Even years later, sometimes. Sometimes old anxieties come back and we can't just pop it immediately, either.

Ok, fine. There's harem and some smut, and that can offend some people. Personally, the author built the relationships and emotional connections really well, it's not just "oh look, another character, better have them in the harem." Nor is it "oh boy, it's been 2 chapters without a sex scene, better add one." It's not the main story or plot. It's present, yes.

If you want to, just think of it as if they're on tinder or something. Those people run around having premarital sex and etc, and society doesn't care. Boohoo, a harem. Boohoo, occasional sex scenes.

Plus people are more open about sex these days. And in some cases, relationships. Personally I'd only want one girl, but I'm not going to hate someone for having an open relationship if they're honest with the other participants.

Cheaters are jerks and etc, but that's different from an open relationship.

If it's that much of a problem, just don't read it. Personally, it's not a problem, even though I'm monogamously-minded and love my best friend and intend to not love others like I love her. It's a story.

Sure, irl it might be a bit monkaW to some or a lot of us, especially us religious folk. It's not irl, though. So don't get your knickers or panties or briefs in a twist. Sure, dissemination of ideas, developing acceptance/tolerance of said ideas, etc. Just...separate reality from story and be mindful, and it won't be a problem, if that's your concern.

Anyway. 5 stars all around. Good pov of anxiety disorders. It's not the end-all be-all "this is what anxiety is like," as it's different for everyone, but it can definitely help you understand us folk with anxiety.

I first read this series when it was being newly posted. It's one of my all time favorite reads, and I recommend it to anyone with an interest in the genre. I'm so glad the author is posting again! She's one of the best I've read, and I've read a LOT.

I have read 20 chapters now and I see there are quite a lot I will still be able to read but I already want to leave a review with my first impressions.

I really like how the MC is portrayed and that the story focuses mostly on her thought processes and some character interactions. I really like fleshed out characters, but I do hope that the tone changes in the future and that she experiences some growth. I cant imagine myself reading 100+ chapters of intense social anxiety and conspiracy theories.

I havent seen much from the worldbuilding other than that its our world and that there are magical entities. But so far so good.

Also the grammar seems pretty good and as English isnt my first language I m probably not qualified to find minor mistakes. Most of the time my brain skips them anyways.

Overall I like the story so far and its definitely one of the better ones on RR so far. So give it a shot!

P.S. it seems I havent reached 200 words yet so this is just a sentence to increase the word count and hope for it to reach the required amount.