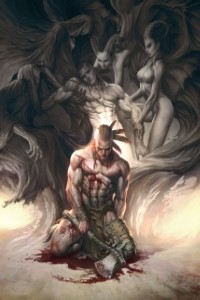 *This is the reworked version of my original story Rebirth Online, due to the vast changes that will be taking place and a desire for a proper number of views and new comments on the changes I have made a new page and will include a link back to the original Rebirth Online for those interested in seeing the changes. Click Here for Rebirth Online*

Adam Sterling, A man who through a series of events went from being a bouncer at the local biker bar to being a pro gamer in the world of Rebirth Online, a fantasy VRMMO based upon real life ancestry and myth. Players will each have a tailor made story much like a tabletop campaign, their choices in all things will have an effect on the game itself even if it is small.

Players will have their DNA tested which will allow accurate placement within the old world, in the same general area as their ancestors would have been. Allowing them to chose their starting area from the many races that make up their ancestry. from there they will undergo the Trials, a series of events serving as their entry into adulthood which will start the players off at the age of Thirteen, with every trial completed they will be advanced in age until they are Eighteen, from there they will have the option of staying Eighteen or advancing to their physical age.

From there the world is open for them to go where they please, be it becoming a blacksmith, a cook, or a lord, though they will have to earn everything through the proper ways, hard work, and dedication to their roles. After all, one can not show up to a city expecting to be its mayor for nothing.

P.S. For author. Don't care if you decide to drop this again, it's a great piece that I have enjoyed each and every other time it was posted.

Its Great That He Keeps Rewriting It

I have only read up to chapter 3 so far, but what I have read is great. I also can't help but be impressed that he keeps trying to improve his work. The characters are interesting and new so that keeps me glued to what I am reading. You don't see Nordic Litrpg's often and you don't see good ones at all.

It's just starting and I love it already

Only five chapters posted but I love what I've read so far. The MC's RL and in game personas are interesting and make me want to know more about both. The in game setting is intriguing with lots of chances for exploring the game world/experiencing new things. Please keep up the great work and don't drop this story/rewrite. Thanks.

its a really good story keep up the good work

I love it! It has many aspects which are rare and they are good. Keep up the good work :D