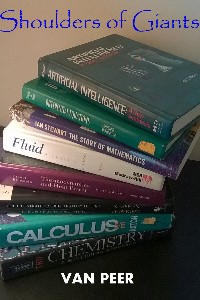 Sean Cook was an underachieving attention-deficient teen, content to coast through junior year of high school, until a freak accident grants him the power to instantly assimilate the content of any book at a touch. Suddenly Sean finds the sum total of human knowledge literally at his fingertips, and impossible dreams aren’t quite so impossible after all…

I really like the idea of this story. It is fresh and new and exciting to read. But there are some kinks that really need to be worked out first.

Let's start on characters. They are extremely one dimensional. They are all defined by a single characteristic. The mother is overbearing, Mei-Ling is smart, the Fullers are rich. You need to give them more depth. Why are these aspects of them important, how do these emotions and traits affect other parts of their personality. This especially shows with Sean. Right now he is just a bland character that happens to have a super power. The reader cannot understand or find anything else out about him. He is only what you describe him as, and right now he is defined only by his ability.

Next is pace. Way too fast. We know so little about his daily life, that when the story picks up the reader is lost and confused. You write like you expect us to just KNOW things. Things that we couldn't possibly know. And then you realize it and spend a paragraph trying to cram it down our throats before moving on, treating the lack of knowledge as an afterthought. A simple way to fix this is to spend more time in the beginning to flesh out everyone and everything. It would actually help the character development as well.

My final gripe is with your emphasis on way too many words. I'm going to write the rest of the paragraph, and try to get across what it feels like reading your story with all your italics. You emphasize so many words in such rapid succesion, that when an actual important word shows up that the reader should really hone in on and key in that that is an important detail, it is lost in the sea of other less important words. When you put emphasis on science terms, it doesn't do much for the reader other than confuse and bog them down. You are making even the word it feel more important than it has any right to be. You could easily get the same effect by simply capitalizing the I in It. It just feels like a bumpy road in an old car. Jarring, uncomfortable, and annoying.

I hope I got across my critiques without being too harsh. I really do think that this book has potential, but your stylistic choices and story speed are really holding everything back.

I don't get who the MC is supposed to be. On the one hand we have a rebel with a cause hating on the establishment. Then we have the other rebel with a cause wanting to be the establishment. Then we have the lazy and anti-social rebel without a cause. I get that you want to show how gaining these powers are changing him, but it doesn't feel like character growth or devolution, just inconsistent characterization.

Other than that particular problem, and it is a whopper of a problem, the story is quite enjoyable. Heavy on the technobabble, even if it is actual science, but I enjoy that.

As of chapter 20, not recommeded

The premise was good, but it took a turn for the worse.

"The only way I see to salvage the story, is to completely redo the last 2 chapters, everyone acted like immature kids last chapter, and the character of Susan and Richard did a complete 180° from normal somewhat humble, mature and smart rich parents, to arrogant, stuck up, immature spoiled idiots, so contradictory and disappointing. These last 2 chapters made me lose hope in the story, and like the others, I agree that you should never alienate your main protagonist from the audience. Like, who can relate to an idiot trying to steal from other people, even though he's really well of himself, and then doing it in the stupidest way possible so he was bound to get caught? That's just not relatable, or even entertaining to read. I felt more sorry for Judith and the grandma in chapter 20 than I did for Sean(MC). I actually felt Sean deserved the badly written, out of context, unprovoked punch to the face, no matter how poorly it fit into the story and came out of nowhere. I never want to feel like the guy I'm supposed to root for, is a total utter arsehole with minimal common sense(Or at least common sense that gets turned on and off like it was a light switch).

I don't know what must have gone wrong for you to make such a bullshit 180° on the story's direction, but I can't force myself to continue reading. Good luck with the rest though." - was the comment I left on the latest chapter(20), and I was not alone in that opinion though I surely felt more, but also perhaps less, strongly about it than some did.

I feel that this isn't bashing the story in anyway, and that if the author were to act on it, that the story would be salvageable.

Style & Story: Better than average and definitely had potential.

Grammar: The author got rid of the weird emphasizing so you only have to bear through it for the first couple of chapters (which is a good sign that the author listens to the audience and acts on critique), after that everything is fine and the grammatical errors are kept to a minimum.

Character: The deal breaker of this story. The style and story was a little thin but had potential to turn out really good, but the characters are bland, boring and tend to contradict their previously established design/character. The story can be borne(carried) by good and excellent character design alone, even if the story/setting and style is pretty bad, but even with the best setting and style(which this story doesn't have), if the characters are bad, no one will want to read it(at least the majority wouldn't). It's not a story about a certain place or setting that makes stuff interesting and worth reading, it is a story about the people, the characters, of said place, that makes you want to read it. So to me, character design is the absolute essential and most important to make a good story that drags people into it, and this story, simply doesn't have that, it might even be the worst character design I've ever seen, which is why this story is not for me, and might not be for you either.

Not my cup of tea

How do I get rid of this? It won't go away lol

This book'so got potential, but it's bogged down by a few things. First of all your characters are lacking, like the other dude said I don't know much about them at all despite how much you've written about them. The story is fine but you jump from eventhe to event and it feels rushed in those transitions. Even the events are somewhat ruined for me because all I've seen so far is technical jargon, which is fine and all but any explanation you give is either something I'm already familiar with or something I've got no clue about, neither of which really works out well in novel format. I read for plot, not to get overviews on different fields and things I may or may not already know. It's especially boring when it is something I know, and as a physics major most of the science stuff you're writing in is stuff I either know or have made some connections to with my current knowledge on the subject, which means I get absolutely nothing from those explanations. Stick to the story man, insert the science stuff into how you write the plot; don't just feed it to the readers, build the plot around it and give us some small tidbits of info along the way to make sure people dont get lost if needed

One of the most intriguing fantasy/sci-fi worlds I’ve ever read about. The use of quantum, string, and statistical mathematics to build a misnomer world is ingenious. The slow releases are the only thing I can truly complain about but with all the research and logic driving this novel and it’s quality I can stand waiting. Keep up the wonderful writing I’ll be following <3

Great story, but ease up on the italics

This is a great story, very much in the same vein as Charles Stross's Laundry series (but on the Sci-Fi end of the scale rather than Fantasy) and actually reminds me of David Langford's BLIT shorts or a modern-day version of some Alastair Reynolds.

The only problem is that the author needs to cut out about 95% of the italics in each chapter. Don't take style advice from Christopher Nuttall.

Gonna give it a solid 5 all around. Based upon up to chapter 7.

Why? Because the author seems to have done his/her research. The science that the MC spouts off is verifiable and appears very much correct.

I could NOT find any grammar or style errors. Very clean writing.

The characters are 'alive' and weirdly enough, I actually can identify with them all.

This book has ALOT of potential. PLEASE complete it. Cuz if you don't, I'm coming back to give it a 1 star rating.

First off the half star is almost entirely there because of the title. "If I have seen further, it is because I have stood on the shoulders of Giants" is one of my more favorite lines. Without the title eh....three stars.

A honest review of the story?

It's the Anime "No Game No Life" without the NEET subculture, soundtrack, genius level intellect, keen understanding of human psychology, plot, god level narrations, joy of being the smartest person in the room, or the willingness to dumb it down as needed. Set to "Saved by the Bell" and shot from a single PoV.

Probably one of the most frighteningly "smart" novels I've seen with a jaded well read way of thinking that honestly is important. But it utterly fails at being subversive enough or Interesting enough for me to care.

The novel in a sentence is the application of Jargon.

Gets my blood pumping

Too fast paced paced, caracters need to be fleshed out and exposition on world needs to be more natural(explain science and math terms more)

The story is very intriguing right off the bat and the logic behind it is all rather supported, one of those stories that while you enjoy it you also feel like you are becoming more intelligent just by reading it. The main character is fully 3-d and while at times he is irritating he is human as opposed to a caricature of one. The 'power' gained is not near as overpowered as it could have been because the character himself acts as a limiting agent. It's not very far along just yet but I rather like this and would recommend it.