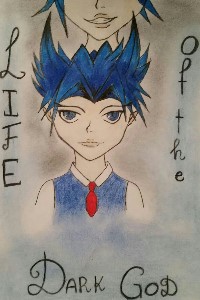 Life of the dark god

This is the story about the young god Hikaru. He was born in an old world and had to fight through a lot of hardships since birth. His strong character got formed by all the things which happened to him during his fights. Follow the dark god through his trials and adventures to become a higher beeing.

(hopefully it will be the first of 3 seasons)

It gets way better later on

I'm not sure why I haven't reviewed this yet. Probably because reviews aren't really something I do, and then I noticed that he has a really bad review from someone who only read the prologue, and not even the full thing, by their own admission.

There are a number of issues with this story, but 90% of them stem from grammar. The way dialogue is done is a bit annoying, and the wrong word is often used. Grammar gets much better in the later chapters.

If you're looking for professional-quality, look elsewhere. This is written by someone who doesn't pay for an editor, and probably doesn't care enough to edit. He seems to enjoy writing the story more than he does people's opinions about it, the few of them that I've seen pop up (and I've been reading since the start).

Past the grammar, there are very few plot holes, and despite the number of chapters, they're relatively short, but not too short, and he stays consistent with what's going on throughout the story, and things you've probably forgotten about get mentioned every now and then, such as why Hikaru doesn't do this or that, or that this is what he's doing.

Don't be fooled by the synopsis - it doesn't do the story justice. At all.

The story is about Hikaru, the new Demon God when his parents die, and his journeys through friendships, betrayal, loss, challenges, trials, and more as he seeks out the other four new gods of the world to *NOT SHARING THE SPOILER*.

The only reason Character Score is a 4.5 and not a 5 is because of one simple fact: currently, Hikaru is a wuss. He lets other people walk all over him at times, and it isn't keeping with the rest of his established personality. The author's told me that that's going to change shortly, so if it does, I'll fix the score to a 5. Hikaru, apart from when dealing with the people supposed to be helping him, is kind, but also no-nonsense. He punishes fairly to those that matter to him, and harshly to those who wrong him. He doesn't stand for anyone hurting - or even threatening - those he cares about. Something people probably find as a flaw in his personality is the fact that he will do things just for fun that most would consider morally wrong.

He's a demon. D-E-M-O-N. It's part of their nature. Plus, it makes him more enjoyable, even if he antagonizes his "friends" and "allies". They do far worse to him, and he usually has a solid backing for why he did it, while they're just jerks.

Overall, I give it a 4.5/5, and if the grammar/spelling was better, I would've given it a 5/5 overall. An enjoyable story that reads far better as you get through the early crap.

I would like to add on that you can skip the first arc of the story, and go straight to the Prologue of Arc 2. Arc 1 is really just a prologue, and it seems to drag on as you read it because not a lot's happening. Only the end of it really matters at all, as of where the story is currently.

Some parts at the beggining I didn't enjoy at all but in all fairness it getts better and is ok in most aspects later on in the story.

I've had a few problems.

The synopsis reads like a wuxia/xianxia novel, and I really don't like it. I always hated how they have to summarize a novel with them bragging about themselves, rather than talking about the main plot. It serves its purpose as an attention grabber, but at the same time, this turned me way off. The plot should be what hooks me in. The characters should be what makes the journey very enjoyable.

I didn't read much; only finished about a bit of the prologue.

I did have problems with grammar and it made it a chore to continue reading. The way you denote a person speaking is personally off-puting for me. This read more like a play for a theatrical piece, rather than a novel.

I also did have problems with some dialogue, which could possibly be fixed by contents from future chapters that I haven't read.

“Yeah, yea you are right. So, what will his name be? If you want my opinion it should be something like first. I mean we hopefully will get another one and we could name it second so there will be no problems with naming.”(Stupid Father)

That was taken from the prologue. The grammar issue aside, I had a hard time understanding what the third sentence is trying to say. Is the father suggesting that the name be First? Or are you saying the name should be synonymous with the word "first"? This is where grammar would make it less ambiguous.

Also I don't know if it's anyone else, but the father sounded rather submissive. I don't have any trouble with the father being submissive, but I just want to point it out to make sure you know about it.

Another example I would like to point out is redudancy:

"I finally knew both of my parents’ names. My mother thought for a moment. While she was thinking, she massaged her forehead. Suddenly she pointed her finger at him and said."

In this context, you don't need to say "I finally knew both of my parents' names." That was already a given when they've the readers what their name was.

"My mother thought for a moment. While she was thinking, she massaged her forehead." This sentence can be completely merged into one sentence. There's no point in adding extra padding when a reader doesn't have all the time in the world to be reading fluff words.

Edit: Author, you have your pm inbox disabled, so I'll just post it here.

Like I said, the synopsis was more of a personal issue, rather than objective.
A good summary should do two things: 1) grab the reader's attention 2) give the reader an idea of what they're about to get into. I personally hate wuxia/xianxia synopsis because it does nothing to inform the reader, other than to stroke the MC's ego.
You'll have to know what you want to write about, then the summary should reflect that. Since you're already 21 chapters in, you should have a good understanding of where the story is heading, and you could edit your summary to fit that.
What really makes me not want to read more is the grammar. I really recommend to either get someone to fix that for you, or learn grammar properly. Because right now it's stopping me from reading more. You don't have to take classes for this. Just read popular published novels, see what they do, and understand why their grammar works.
I understand that you don't have much time, but I judge this as if it was being sold. If you read your novel, and compare it to a professional novel, like Harry Potter, which one would you buy? I might sound harsh, which I apologize for, but the best way to see whether or not your novel will prosper is to compare it to other novels.
You have an interesting concept, but its ultimately up to you whether or not you can present your ideas while keeping the reader interested.
Report