Second guaranteed chapter of the week.

This is the chapter where I changed the format of the tables.

"So, it can block all kinds of attacks? That's amazing, Soph!" Lone happily exclaimed as he leant down to look at his lap's occupant with a happy smile. He also squeezed her slightly with his multicoloured tails. 'Maybe the potential of this skill will boost her confidence a little bit? I hope so,' he followed up in thought.

"I-Is it? I'll try my best to keep a barrier up at all times then!" Sophie exclaimed with a happy blush. 'With this... I can help Lone even if only a little bit more... ' she thought.

"I'll look forward to that," Lone smiled. Breena had gone back to ignoring everyone as she playing with the shadows in the corner. Swind had finished cleaning Breena's daggers and was now cooking something quite nimbly with her one hand in the kitchen while Eolande was sitting across from both Sophie and Lone and one of her hands was on her chin as she watched the two of them.

'Hmm, what to do now? I guess I'll check my status card since I definitely went past level two-hundred,' Lone thought. So he carefully bit his finger and smeared the resulting blood on his amber status card that he had pulled out from his storage dimension.

"It sure has gone up a lot across the board... hey, Eolande," at the mention of her name, Eolande perked up and looked at Lone with a mischievious glance while Sophie frowned and cuddled her fluffy companions even harder.

"How can I help you, Husband?" Eolande said with a grin as she looked at Sophie this time, who, in response, deepened her frown and turned around to hug Lone, shifting her legs in the process.

"He's mine..." Sophie mumbled loud enough for Lone to hear. He stroked her golden-brown hair and continued what he was saying.

"My name is 'Lone', not 'Husband'," Lone sighed. "Anyway, do you have a status card? Or can I just view your status? As you know, I can see system screens and I'd like to compare your stats to mine," Lone asked while he tried to completely ignore Eolande's flirtatious behaviour.

"Such an incredible ability. It really is a shame that you can't forcefully view other peoples skills and status'. That would be very helpful, but your question, of course, go right ahead and view to your heart's content... if you want to see... anything else, I'm more than willing," Eolande said with a wink as she waved her hand, making her status appear before Lone's eyes.

'Mmm, I know,' Sophie replied as she buried herself into Lone's chest with ease. It was a bit surprising, but she actually hadn't grown much in height over the last two years,. The appearance change of hers that the two of them had noticed was merely another inch or two in height, but her face had grown more defined, showing her change in bodily age. This was why she had no difficulty sitting on Lone's lap. However, her adult version was clearly older, which the two of them found odd.

After thinking over this for a moment, Lone finally viewed Eolande's status.

"Wow... besides your luck, charm, magic power and this other stat I've never heard of, magical attunement, your stats aren't that impressive. But fucking hell... you're level is so high... you're an X-Ranker, right? A cosmos Level Being?" Lone asked with his thirst for knowledge in full swing.

Eolande smiled and waved her hand, making her status screen disappear. "Most Cosmos Level Beings focus in one area, mine happens to be magic, and yes, to become a Cosmos Level Being in regards to the level system, you need to be at least level five-thousand. You have a long way to go, especially if you're limiting your own ability to gain experience by travelling with an unaccepted being like Swind. Honestly, you should really fix her up so she could at least be useful in battle," Eolande said, diverting the subject.

'Does she not want to talk about the system and ranks anymore? Oh well, I got what I wanted,' Lone thought. "I never told you because I was pissed off at you, but Swind won't let me heal her," Lone said.

"Hoh? Why would that be? How curious," Eolande asked.

"She doesn't want to regain the body parts that she lost due to her actions against me, kinda like a reverse trophy? Hrm, like a physical reminder that she needs to change? At least that's what she told me," Lone said as he looked at the Lemurian who was busily making lunch.

"I think she'd accept mechanical replacements since they'd visually show that change has happened. However, not fleshy replica ones like what I can give her right now. I really want to find a group of skilled Dwarves to teach me their steampunk technology so I can work on her hand and tail. Shame Hope didn't have any skilled in inventing, just Dwarves talented in pure smithing," Lone expressed with an upset frown.

"Ah, I see," Eolande replied as she looked at her as well. 'She has a strong will for a former swindler. I wonder what happened between her and Lone when he went to get a formal apology from her?' she thought in wonder.

Here's some fanart from the lovely author of, Mythran's Master of All - Continued, Bokuboy. 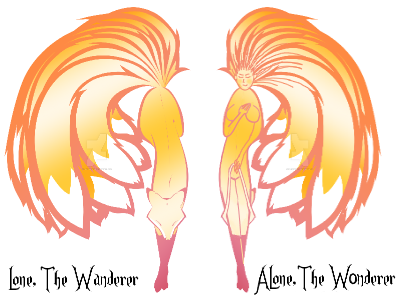 I Am Malcolm Landgraab | Hello, You're Through To Hades, How Can I Help You Today? | Paradox