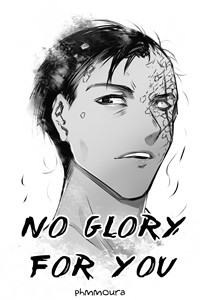 No Glory For You

Does a tragedy can only end in tragedy?

In a dark and tall room, the heavy silence took over the men dressed in armor gathering around the throne.

“Please, your highness,” the bald man said, the despair his face. He gulped and went on, his voice crackling, the sweat running down his face. “Reconsider… W-we haven’t heard anything from them… yet… We need more time. It’s not safe—”

“If they’re not back yet, then they’re dead,” another man interrupted. With the right eye ruined by a scar, he looked around with the good one. But when the men avoided meeting his eye, he turned to the man at the throne. “Your highness. They were not weak. If they are truly dead, this means the other side is far stronger than we imagined.”

“Yes,” Scar said, lowering his eye. With a shadow over his face, he faced the others. “The Great Shadow looming over our world! Over mankind!

Once again the heavy silence filled the throne room as his words sunk into everyone, the dread embracing them.

“Is the prophecy true?”

“We need to deal with it now!”

“We need to eliminate the vessel…”

“But if Magno and Borgonha are dead…”

As the men screamed, the king opened his eyes and raised his head. The voices died down until only their breathing could be heard.

“We do not have time,” the king said in his deep voice. “If that is indeed the Great Shadow threatening our world as the prophecy says, we need to act now.”

The men looked at each other in silence. After a long time, Bald stepped forward. “But your grace—”

“We cannot let the peace and prosperity my ancestors brought to this kingdom destroyed.”

“The king is right,” Scar said, turning to the others. “It’s been almost five hundred years since our great kingdom was born. We need to fight and protect it so it may last five more hundred years!”

“Who wants this glory?”

As the knights looked between themselves, the king stood up. “If my vassals are afraid, what kind of king am I?”

“I’ll protect this kingdom. As my ancestor, the Hero King, I will—”

Before he could finish, he coughed blood. As he looked down, a dark hand appeared out of thin air, inside the king’s chest

An instant later, half-man, half-beast appeared. As the king stared into his eyes, the being smiled

Taken by surprised for an instant, the knights rushed forwards with their swords in hand.

But it was too late.

As Sam closed his fist around the king’s heart with his bestial strength, the swords reached him.

Sam closed his eyes as he felt more swords cutting his head.

His consciousness faded, but he had a smile on his lips and died as a human, finally resting from the nightmare.

I died smiling like in the movies, he thought. The last one he had.

Thank you for reading this story.

It was short and I could've gone into a differant path, but I really liked working on No Glory
No Glory is over, but it doesn't mean the story about the characters are.

"Death is the beggining of the next journey"
It will take some time for me to write, but I hope you'll still follow them

Support "No Glory For You"