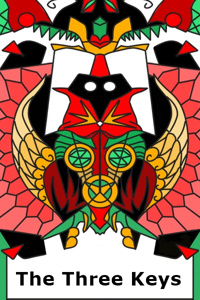 The first thing I noticed was the smell.

It was the smell of dew, of the fresh breeze that comes down from distant mountainsides. That smell entered my mind, rousing it from slumber. With great reluctance, I complied.  I yawned while my body complained, stretching my arms and legs to get some feeling back into them.

As I did so, my left leg brushed upon something hard. Rising up, I saw it that it was my sword; an old but reliable piece of steel. I pulled the weapon close, then used my free hand to search for its companion, a round shield. I had to cut my search short as hunger reared its gluttonous face at me.

Defeated, I took out a piece of bread from my travel pack, tore it apart, and ate a piece. I ate several more pieces, then ate some fruits I had collected the day before. I washed it all down with a mouthful of water from my waterskin.

After breakfast, I put on my gear. There was nothing fancy about it; a set of leather armor older than me and smelled the part too. I grabbed my travel pack and slung it over my shoulders, then fastened my sword to my belt. My round shield was trickier, as the knots keep coming undone, but I hoisted it soon enough onto my back.

I finished a request for a nearby village yesterday. It was for routine harvesting, gathering herbs and animal parts. Easy enough. I asked them where their hunters and rangers were, and they replied with a vague answer. Something about a joint quest in a neighboring region to slay a dragon. What fools.

As I was about to set off towards the village, I heard it. Something moving my way. A large, slithering. and slimy something. I stopped moving and strained my ears, trying to figure out what kind of animal made it. The sound grew louder, and I still didn’t know what made it, so I hid behind some bushes. I held my breath as a terrible smell came, and then I saw the cause of it all.

Its head was that of a snake, large enough to swallow a man whole with little effort. It had four eyes sitting atop thin, rigid stalks, which moved a bit when its skin moved. It had the body of a giant snail, violet spots peppering its brown shell. Mucus dripped from every inch of its slimy flesh. Every now and then, its forked tongue lapped the air, with its head close behind.

A snake-snail. I thought. But big. I didn’t even know they can get this big.

I unsheathed my sword and equipped my shield.

The snake-snail stopped in its tracks.

My heart beats once.

The creature hissed, then turned its head at where I was.

“Fuck,” I muttered, stepping away from my hiding place, with sword and shield at the ready.

It responded in kind, and we measured each other; man versus beast.

Then with little warning, the beast struck first. Its mouth opened like a net, inward-curved teeth beckoning me to my doom. I dodged in time to hear a snap at where my I was. Wasting no time, I rolled to my feet and managed to cut a decent wound on its flank. The monster proceeded to smack its neck into my body, sending me flying onto a nearby tree. The branches broke and splintered under me as I started to fall.

Then, one of the branches managed to snag my leather armor, suspending me like a weighted banner. With this height advantage, I considered staying where I was until the monster grew tired of me. And I'd have done so if the branch holding me wasn't creaking with a dangerous sound.

A look of impatience.

"You look like Able Filch." I mused, dropping off the opposite side of the tree from where the monster was. I walked off a bit further as I searched for more even ground, the snake-snail not far behind. I finally found another clearing in time for the snake-snail catch up to me, its hunger plain as day. I struck first this time around, slashing at it as I aimed at its vulnerable sides. Instead of feeling the blade sinking into flesh, I felt rigid steel meet mine and saw my slash bounce off its shell. I moved too late as I saw its neck whip around, hitting me once again at my sides.

My breath left my body and I felt my bones crack.

The impact carried me a fair bit, landing me near the beasts’ behind. I put out my sword for a coming second strike, only to find none. Wary, I looked at where I was and found my adversary’ turning its bulky body, it's head coiled and eager to strike again. “Now there’s an idea.” I smiled, readying myself for another run. I repeated my last try up until the inevitable glancing strike at its side, but with a twist. The monster reacted as I expected and hit me with the force of a runaway cart. I let myself go limp and rolled towards the monster’s flank, at which point I immediately got up and went to work.

For what felt like hours, I hugged the space near its behind, slashing with wild abandon. The beast never relented in its pursuit, snapping at me and whipping its neck out with fervor. I only stopped when I noticed the snake-snail had become still. A disgusting island of flesh amid a putrid puddle of its own blood. Still not sure of its demise, my body relaxed nonetheless, and I felt drenched in sweat.

But my breath became shorter and shorter until a simple gulp of air felt like a struggle. I cast a look at the snake-snail’s corpse, and a simple conclusion came to mind.

With little choice left, I abandoned my sword and shield and brought out my travel pack. With some scrounging around, I felt a rough glass surface and pulled the object out. Its color felt reminiscent of diluted blood and tasted much the same when I drank it. Not waiting to see if it worked or not, I grabbed my sword and shield. With every step closer to camp, my body felt more and more on fire.

I made it in time as my legs gave in, my mind burned of all thought but complete and utter despair at my stupidity. At its peak, my mind was completely blank of anything save for the heat.  Then, in slow steps, the heat receded, leaving me even more exhausted and thirsty. I drank two mouthfuls from my waterskin and sighed. The sun was rising higher above me, and the heat became more and more unbearable.

It was time to get back to the village.