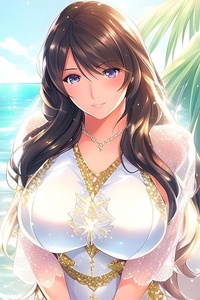 On the plateau, everyone stared as the man who had been summoned fell unconscious, many with a look of bewilderment on their faces. Knights who had usually hardened expressions due to seeing many hellish things on the battlefield were left looking like fresh fish out of the water. King Hildebrand, who rarely succumbed to his emotions, had a look of astonishment on his face. Even the foolish Nicolas wore a stranger look than usual on his face.

The only two people who were not fazed by the appearance of the summoned man were Avelina, who was being held up by Rolla, and Rolla herself. They only looked at the man like two kittens who just discovered something new and exciting. Steadily walking closer to the summoned man, Avelina noticed a flowing red liquid was coming from beneath the man. She quickly escaped from the support of Rolla and rushed towards the man. Even while being completely exhausted, she showed an amazing burst of speed.

Lifting his head, she examined his body. Besides having darker skin and a bigger build than most, she determined that he was a human. Finding the source of the wound, she quickly took out her grimoire and tried to use the healing spell that was stored in it. She quickly realized she could not gather the amount of mana she needed to use the spell within her grimoire.

With a panicked voice, she shouted, “Who here can use a healing spell?”

That anxiety-filled shout awoke the people who still could not comprehend the whole situation from their muddle-headedness fully.

“I can.” Responding was a man in his late 60’s with a shaved head, a white beard down to his waist and a face filled wrinkles. He wore a brown robe with red trimming and several sliver feathers embedded in it. He was the royal physician who had finally awoken from his daze thanks to Avelina’s yelling. He stepped forward and moved towards the injured summoned man, showing a look of discomfort as he looked towards the king with a what-to-do expression. Even though he was a royal physician, most healing spells were brought from the Holy Numbs Kingdom with a large amount of gold or other things with similar value. Enough gold for a family of 6 could live off for several years was the cost for the simplest of healing spells. After thoroughly examining the summoned man, the physician decided that his wound would require an intermediate healing spell. Even the royal family had to get permission from the king to use such a spell. Noticing the doctor’s hesitation, Avelina quickly understood the situation and yelled, “Father, please allow the use of the intermediate healing spell.” Still gazing at the summoned man, he unconsciously nodded.

With the approval of the king, the royal physician put every grievance he had away in the back on his mind. With a flick of his wrist, a bronze-colored book appeared from within his robe, and he began using the intermediate healing spell that was stored within his grimoire. By simply tearing out a page from the book and pouring mana into it, he could use the spells that were stored on the page. Oddly enough, if you were to look closely at where the page was torn from, you could see it was recovering at a slow pace.

Seeing that the wound on the summoned man was healed, like a dam that had finally reached its limits long ago, Avelina collapsed. Ever since she had completed the hero summoning ritual, Avelina had been running off willpower alone. Once the situation had calmed down and the adrenaline that had been keeping her awake wore off, all the exhaustion and stress over this whole ordeal hit her all at once. Seeing Avelina fall unconscious, Rolla let out a panicked cry.

“Ave!” Rushing forward towards Ava, she cradled her body like a mother rocking a child to sleep.

Seeing that the wound on the summoned man was completely healed, the royal physician walked towards Avelina. Looking at Rolla cradle Avelina, a hint of disgust could be seen in his eyes.

“Release the princess, you vile bitch.”

Anger appeared on Rolla’s face, but she was more worried about Avelina. Slowly removing Avelina from her embrace, she glared at the doctor before moving to the side.

The royal physician examined Avelina, a worried expression appearing briefly on his face. He performed one more final check on her before walking to the king and whispering something in his ear. King Hildebrand, who had just recovered from the shock of the situation, received the news about Avelina’s condition. A faint look of discomfort could be seen before his face returned to normal. After a while, he finally spoke to the people on the plateau.

“The Princess has just collapsed from exhaustion. She will be fine with some rest.” Pausing, he thought for a moment before speaking once more. “The matter involving the summoned hero will be a secret; for now, anyone caught telling it will have three generations of their kin executed.”

The king commanded his knights to bring Avelina and the summoned hero to the castle. Taking a final look at the man, he gave out another order, “Also, make sure that that individual is guarded until farther notice.”

I'm back. Life got hard, but I made it. I'm going to try to release a chapter once a week for the next couple of weeks to try and remove a lot of rust I got while I was away. Anyways thanks to the people who are still following this story and for now on I will try my best to keep it update some how. Also If you find any errors plz tell me.

Bio: Just a guy who loves to writes story's between his 9 to 5. If you guys want to keep me motivated please make sure to rate, comment and leave a review.