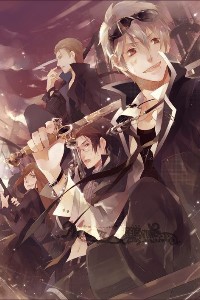 Sup CrowBloods! You guys chose daily updates so here I am back with a chapter 3 days in a row! Remember to review and enjoy

We finally arrive in front of Walmart. We’ve killed enough zombies for me to level up 3 times. Honestly, for how many we killed, I expected more, but it seems the required XP always doubles for a level up, making things twice as hard every level up. After putting all 15 points into speed and hitting 50 in the stat I feel unstoppable. Eugene has told me when I’m going my fastest all he can see is a blur. My damage does a solid 30HP with just my fists now. Although I haven’t upgrade my strength stat directly, the speed up my fist connecting probably adds extra damage. If you think that’s good, I do 45 damage with my bat, and all of this is before I do Power Swing and Power Punch. I haven’t had to use my bat in a while though since I got my katana.

It was a drop that made things a lot easier. Including my katana, Eugene got a staff that makes his spells more powerful and got 520$ in all. I gave Eugene 250$ for his trouble and help. I of course got the larger portion, he didn’t seem to have a problem with it though. With 20 lesser health potions and 16 lesser mana potion. All in all, today was a good day. Something doesn’t feel right though, we haven’t seen a zombie in a while. I don’t see anything wrong...but I just have this feeling in my gut. I rush into Walmart to get what we came here for. Running through the isles, Eugene is still confused since I haven’t told him what we’re here for but honestly, I don’t think he cares. He’s had this stupid smile on his face for the longest time now like he’s having the time of his life. Not to say anything about my own smile constantly on my face, I know that I’m insane, and I’m okay with that.

I finally find what I need in the back of the store, the BB gun section. I know, I know what your thinking. Did I willkingly face the apocalypse for a couple of BB guns?.....Yes. Hey! Don’t give me that ‘You’re a dumbass’ look! There’s a reason to my madness. Earlier today when I made the chairs and table I noticed that I was only able to do so because the design was simple and I knew what it needed to be made of. I knew the purpose for it’s creation and how to build in my mind. I grab 4 silver pistols that look real enough. I sit on the counter in front of me to begin.

I put 2 of the 4 gins into my inventory and start. Reaching out to that ball of power right next to my heart I spread it to my hand and send it into the guns. I feel the mana probing the guns but a lot of it is dissipating as I release it. I don’t think I can fix that right now, maybe more wisdom and intelligence will give me better control. I constantly spread my mana out and retract it back into me, forming a better and better picture with each rotation.

After I feel like I know the weapon good enough, I stop retracting my mana in the process. Instead I lace the exterior and interior of the guns with my mana and focus on keeping it there without constant exertion. After about 5 minutes I finally get what I need to move on towards the last step.

Now sure the gun is able to hold my power without breaking I nod in satisfaction. I channel my mana through the gun, making a Mana Arrow. I feel the gun shaking in my hand, radiating power. I begin forcing the mana to get smaller and more compact without loosing it’s power. The fact that Eugene already made Mana Bullets and told me what to do helps a lot. It’s just like he said, it feels like I have to sculpt the mana into the form I want. After a bit of sculpting, the gun stops shaking. I breathe a sigh in relief, I thought it was going to break for a while there.

Perfect! With all the manga and anime’s I’ve watched, mages always looked dumb to me. That pose of facing someone with your arm extended and palm faces towards them looks badass in anime but when going to anime conventions, it just makes you look like a weeb. I don’t want to tell Eugene that he looks like a weeb club reject but he just does when he poses like that. The only cool person I remember that might look good in real life is Xanxus from Hitman Reborn. His gun that shot his flames were amazing. Sure fighting zombie horde because I don’t want to look lame seems stupid but we needed to train anyway! So don’t look at me like that! I’m perfectly aware of my insanity.

I hear a zombie crashing through the Walmart doors, running towards us. There’s only one. Weird...did we exterminate the rest of them or something. The zombie population has been extremely low for a while now. Shrugging, I decide to test it out and pull the trigger for visual effect, releasing the Mana Bullet across the store and one shotting the zombie in the head....Fuck that looked cool.

Ooooh shit! Yes! That’s what I’m talking about GM! That’s why you the best!

Zombies begin spawning way faster and rapid than before. He’s not even trying to make it look like they're coming out of places anymore! They’re just straight up spawning out of thin air! Dammit GM I thought we were friends!!! I wouldn’t mind it so much if they didn’t spawn right the fuck in front of us!

“RUN!” I yell while sprinting for the door. I make it in seconds but Eugene is more than a few paces behind me. Fuck, he’s too slow. I begin providing cover fire for him to escape. As he finally gets to where I am we both run out the door. I have to hold back my speed or I’ll leave him behind easily. They still die with one head shot but there is just too many of them in such a small space we’ll get overrun easily. While running we notice more zombies spawning in front of us.

“WHat the absolute FUCK!? There’s still more!? How is this level 2 when there’s just so fucking many?!” I yell while shooting a zombie that spawns basically on top of me. Pushing Eugene into an alleyway I hurry and break out of the ID.

And the World Knew Life

I lean against wall and catch my breath. Although I’m not really that tired physically, mentally I’m dead. Today was just THE longest day. I’ve died, been reborn, met GODS, fought PJ, got jumped, and willingly participated in the fucking apocalypse! SUre it was fun but now I’m just soooo fucking done with today. Eugene speaks up.

“W-what was that about? That’s not how it went originally?” he says breathing harder than me. He’s right, it wasn’t. The GM isn’t doing everything the same and to be honest, knowing that I basically know nothing about how this works scares me.

“Ha….HAHAH! But that makes it better doesn’t it. We don’t want it to be boring now do we?” I mumble to myself. Eugene looks confused. “This is not a manhwa. This is not that world, it’s real life and you are not limited only what they have done.” That’s right, it’s a game, but it’s real life also. Even if I’m scared, I’ll conquer this game all the way.

Me and Eugene end up going separate ways as we both go home. It’s only 6pm but despite that I plan on going straight to sleep.