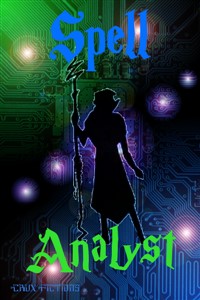 Jude a Systems Analyst and Murl a Physicist find a new universe created through absorbing information from our own.  This universe is quite different as it was overly influenced by computers.  During one experiment to create avatars to explore said universe the two get sucked in themselves.  Somehow Jude gets sent thousands of years later than Murl and he finds himself in a world of magic and swords.  However, there is a game like system that seems to control everything.

Jude decided to gain levels and power so that he can find out what happened to his friend Murl.  Along the way, he stumbles across a quest that will lead him to the truth of the Universe.

WARNING: MAY CONTAIN GOD AND SATAN

This fiction is part of the Pledge.  This story will be finished no matter what!

Style(3/5): Dialogue feels extremely awkward and unrealistic. Action sequences are full of exclamation points, as if making the statement exclamatory substitutes for exciting scenes. The pacing of events doesn't feel either too rushed or too slow, but could use some improvement on how it's presented.

Story(2.5/5): Nothing especially interesting going on here. Seems like a fairly standard LitRPG premise. The circumstances might be a bit unusual but that appears to be an entirely superficial change. Too much of the story's plot and world building is presented in paragraphs that are like info dumps for their originality to really shine.

Grammar(3.5/5): Grammar is passable. Doesn't prevent the story from being read, but has enough awkward errors to make it noticable.

Character(2/5): By far the weakest part of the story is the character development. Too much of what we know about the characters is presented as facts, and while we see a few glimpses of how they interact with the world and monsters around them, the interactions between characters feels forced and stilted. It feels like there's no emotional connection to the words being said, like they're lines of a script that exist solely to move the plot forward. As a non-spoiler example, while there are multiple situations where it feels like multiple characters should be extremely angry/outraged, this emotion doesn't seem to affect their spoken words at all, and the situation is resolved entirely with three or fewer lines of dialogue, and then promptly forgotten.

Overall(3/5): Ultimately, while this story is readable, by chapter 23 the intricacies of the magic system which drew me in were slowly becoming insufficient to put up with the character interactions.

by Translate7 Tuesday, June 6, 2017 5:30:38 AM
Okay so disclaimer, I read through Chapter 31 then I stopped and do not plan on continuing this fiction. Take into consideration that this only applies through there. The premise is very neat as is the whole circuitry and world building part. Definitely 5 stars for that. Your characters seem fairly well fleshed out. One issue I see is that morally they seem very.. black and white. This also extends throughout the story at parts. Where you essentially made darkness automatically evil and light automatically good, at least that's how it reads.

The god/devil part seems kinda clumsily put in, I'm not against it at all (while I deem this irrelevant I'm Christian, catholic specifically) it just doesn't really flow very well with how it's shoved in. I feel like moral delimnas and such need to be put in perhaps? It feels very boring and just light=good, darkness=bad. Idk it just comes across really weird how it's put in.

Grammar issues are kinda prevalent. The most common appears to be using "passed" when "past" should be used instead. Minor issues here and there. The author having the own language invented is fairly neat and interesting.

Overall, I wouldn't recommend this story to anyone who likes a polished product. That said if you just like novel ideas and rough edges don't bother you, give it a shot because the author has some really neat worldbuilding and magic systems.
Report

I made it all the way to chapter 39 before i couln't take it anymore, it became dreadfully boring and cliche.

Story:
Very unique take on the "other worlder" genre, but its poorly executed, the mc is boring 1sided overpowered character and just hops through the story winning every encounter easily, theres no struggle only info dumps with new miracle gains in power, every situation he encounters he takes 1-2 sec to make a new skill and voila situation solved.
Villains are cliche and make little sense beside "just because we need a villain", badass evil recruits lowlife thugs to counter out mc, so that our mc can grow after each encounter, its very linear and thus boring.
Every companion becomes overpowered soon after meeting our MC, meh.

Grammar:
A few tiny mistakes here and there hardly worth mentioning.

Characters:
Overused starter companion, mc saves girl, girl becomes companion.
mc gains fame, everyone wants to join him and look up to him, in a world where lvl 200 is mentioned, a lvl 10 mc is hardly worthy of all this.
I already mentioned villains in my story score, boring and defeated easily.

Overall:
It had a very interesting take on the otherworlder scenario and an actual goal for the mc right from the start, but the execution is poor.
It also didn't help that the uniqueness, which came from a source of logic and technology, suddenly out of nowhere got mixed god and satan. New demention gets created by the influx of vast digital data, where does the typical view of 'god' creating the universe come in, it made no sense.

This story has an interesting concept which fails to live up to its potential due to poor execution.

The biggest problem is with how everything other than the dialogue is exposition. This is only made worse by grammatical errors caused by the author not understand many of the words he is using.

The story should be readable if you are fine with mental corrections as you are reading and a huge amount of exposition.

Seeing as there aren't any reviews for this yet, wanted to add one since it really is worth the read. Note that this is after Ch4 so it can still either get better or worse, but so far it seems that it's going to get better.

So far the Characters and Setting are very interesting (from what we've seen so far) There's still plenty of space for it to grow and uses the setting to explain why magic works.

After the First Book

So. My third review, my apologies if it isn't as great as all the others.

Style score - 4.5 stars. I really like your writing style, it draws me in to the story. You have a very good style. The only reason I didn't gove it a perfect 5 is because I think you still have room to put your own writing flare into the story.

Story Score - 5 stars. I keep approximately 60 - 70 tabs and stories on RRL open at any given time, and your world creation and story creation keep drawing me back, intrigued as to what may happen next. I find myself obsessing over your story sometimes. XD

Grammar score - 4.5 stars. No noticible errors found throughout the story, only one or two.

Character score - 4 stars. Interesting characters that progress well with the story. However, I don't relate to Jude very much, and can never remember his name (Had to just look it up. XD   )

Terrific story thus far! Potential is the key word here. Only 19 chapters thus far and I do plan on updating this review later, but I have been pleased thus far. The author is consistently releasing three chapters a week and appears to be staying several chapters ahead of his releases, so this allows for higher quality chapters due to his ability to edit before release. World creation in the story comes accross as rather weird, but personally I find it very original. It is fairly unique and I enjoy fresh edibles when consuming books. Style is LitRPG, and because the story is still developing it is still not quite fully fleshed out, but again potential! Keep your eye on this one. The first few chapters are fairly entertaining and the later ones are developing into something quite appetizing.

This is an amazing story and has a great concept behind it. The characters are likeable but the whole justice prevails thing isn't really my cup of tea. Not saying I've stopped reading the story, of course it is impossible to have a story where every single aspect of it will satisfy every reader.

Anyway, you're an awesome writer and I hope you don't drop this story.

Style: suffers due to the excess of technical details necessary for the premise, but ultimately is OK.

Story: the world feels designed to be convenient for the main character, but the concepts are interesting enough to compensate. The physicist, Mort did get forgotten, but that will probably by settled eventually.

Grammar: it was annoying early on, but by the second book I didn't notice any errors.

Character: in between the stock op Mc, the stiff dialog (which did improve, somewhat), unmemorable side characters, and may I mention, the Mc was trapped in isolation for litteral lifetimes, and he showed no personality changes, or effects at all.

In addition, the characters are extremely stark in morality, but the second book is better about it.

Tldr: the second book is in many ways superior to the first, but the major flaws remain, just skip book 1.

One of the better stories on RoyalRoad

This is very good story with well developed MC. I liked that he is a person with good morals as there are many stories with moraly grey or even despicable characters. I also like how creative he is.

Maybe the most interesting aspect of this story is the world where it is placed. It's a fantasy world but with hidden from most people, technical, machinery-like, computer-like basis. And the MC is using it and his knowledge of informatic systems to his advantage.