Hey guys, this is a crafting and preparation chapter. Tomorrow's chapter will be the crafting of Chrises wepon. After that we will begin the user voted Reintegrate into society Ark. There will still be combat and magic battles but with more world building and some political intrigue as Chris tries to establish himself.

Here is a map That i have created, this may be subjest to change as it is pretty bad. Enjoy the chapter!! 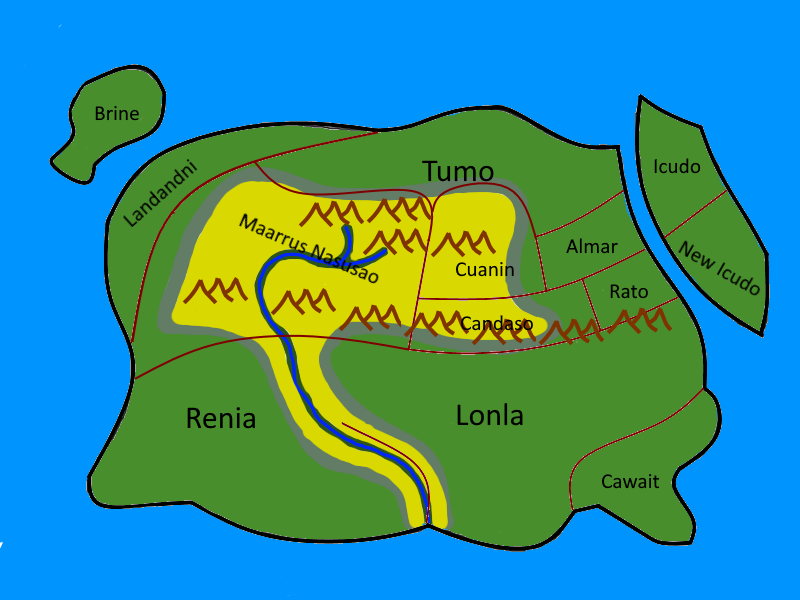 Chris was in the library of his temporary mansion three days into the occupation of the undead. He was looking at maps of the land and the closest city of Madris. It was a mere 1 weeks travel by caravan from his current city of Aldona. He had asked Velona to take an inventory of the city's materials and had been disappointed with the amount of grain in warehouses. He would take some of it with him to solidify his backstory and produce some currency, not that he needed it. Velona had looted all of the undead's pockets and houses to produce all of the usable currency available in the city as well as pilfered the jewelry and blacksmiths few as they were.

This had yielded 480,000 copper pennies, 95,000 silver marks and 12,000 gold gallions. This was a vast sum of wealth for a previously penniless boy such as himself. With each silver being worth 10 copper and each gold being worth 10 silver that put the estimated value of his treasury at 21,800 gold gallions. Each coin weighed about 50 grams, that was a lot of gold, but then it belonged to an entire city, many nobles' entire fortunes and a bank vault of gold.

Chris walked through the comfortable well lit library and over to a pre prepared desk. As he had asked, 200 gold coins sat in neat piles waiting for him, in total 10Kgs of gold. Next to the dark stained oak desk lay a sack. In this sack there was an assortment of mana crystals and a large crucible. With this he would make himself support jewelry and a proper weapon. This was a strange thing, from what he had seen of mages they did not carry weapons. Perhaps they were too locked into their traditions, but he would show them there folley.

He first took 10 gold coins and heated them together mid air to form a gold sphere. Next he took from the small pile of silver coins also on the desk 5 coins each weighing 50 grams as well as being twice as large as the gold coins. Then he added the silver coins into the molten gold ball floating in front of him. This would create by volume a 50-50 mix of gold and silver thus creating electrum. This from what the books in the library told him was a highly mana conductive alloy. From this he shaped 10 bands that would fit each of his fingers.

The resulting ring bases were much finer than his previous attempts, they were a smooth gold colour perfect in every way they had been lovingly shaped. He set them on the desk. Next he would make a new set of high quality crystals to embed in them.

Chris took a few choice lumps of mana crystal from the sack by the desk and put them in the crucible. He used the crucible for this so he could focus more on the process of the refinement, to see if he could learn more from watching closer. He began to flood the crystals with some mana causing them to crack and crumble near the impurities. Next he felt for the chunks of crystal dust that had mana in them and lifted them up and away from the impurities. He then emptied the crucible of the impurities by dumping it on the lush carpet floor. Then he added the pure mana crystal dust back to the crucible and bagan to heat it. As he heated it he added some borax from the bag into the mix. This would help force the molten glass like substance to form into a large whole. He then pulled a small bead off of the whole, very small a mere 3mm in diameter. He then focused on the structure of molten crystal and pushed the fibers into a central facing structure, all uniformly small microstructures facing the exact centre of the crystal where he created a small void. This was empty of air and mana, for the moment. This would be a place for the condensed mana to gather.

Now came the important step that had made such a high quality crystal befor. He grasped all of the atoms in the beed and stilled them. The bead of crystal went from being over 3,000 degrees to absolute zero in microseconds. If this was done with regular glass it would explode, but for this magical substance it froze in exact place, all of the interlocking fibers pointing inward creating the perfect structure. The finishing touch was to properly enchant the object to give it some autonomy.

Chris pushed his mana into the object and followed the book's instruction. Only should the bearer of this ring be full of mana should the ring take some. He imagined a body full of mana and then some flowing into the ring. This was magic he did not understand, how did it work? He would find out eventually.

“[Enchant Item - Mana Draw]” he said the spell and felt a small amount of mana lock into the surface structure of the gem and signify the enchantment was complete. Next he imagined that the body was empty of mana, less than full,the mana inside the crystal would flow into the body giving it mana.

The purpose of these two enchantments would be to charge when the user was at full mana capacity and when they dipped below maximum to give the user mana. This would remove the necessity to manually pull and push mana into the gems allowing chris to focus on spell casting while the rings provided him power.

He created 50 of these stones and placed 5 on each of his gold rings, all of them set at the top of the ring. This would make them less bulky than if he placed them all around the ring and prevent scratching. Next he used a silver watch he had asked found and replaced as much of the metal in the watch with electrum as he could. Then he created a set of 20 gems 4mm acros to set around the watch, they were fully enchanted. This had taken him over 3 hours to create all of the stones.

He would perhaps make more later but for now he needed to test the items. In a book he had been reading he found the standard way to quantify magic taught at the academy. It required a tool made with grown mana crystal. This created a standard capacity crystal that was placed in a tool. The mana that it takes to fill the crystal and make the lightstone on the side light up was one unit. Chris poured his mana into the mana device (Mana Uniter) and the light blinked on. He then stored that mana into one of the rings on the desk and refiled the device. He repeated this until he had drained his mana completely. He had filled it 250 times giving him a capacity of 250 units.

He opened the quantifying mana book and looked at the index.

From this chart he would be currently classed as C+, a marked improvement from his past D- but still so far from the higher ranks.

He had tested his rings and each one had a capacity of 100 giving him a total of 1000 units of storage in his rings quadrupling his mana capacity. With the addition of his watch holding 500 units that was 1500. Tallying his natural capacity that made him 1750 units or rank A-, it was usual for nobles equipment to boost their rank by a few sub grades or even a whole grade, this was still very high quality for such common materials used as a base and would be worth a significant sum.

Now that this was done he would make his weapon, this would be more complex than just a staff to store mana, it would aid in casting a very nasty spell.

He would make a magical railgun.

Bio: Stressed out uni student attempting to share the love.